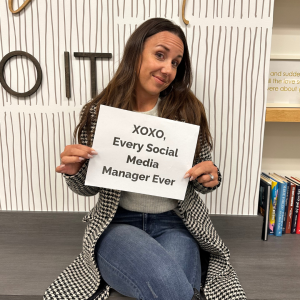 Pic collages, Sephia filters, and graphics are no more! Remember the days when Instagram was just a place to post your super-saturated, duck-face photos?!

Weirdly, the beginning of the social media era allowed users to be their authentic selves and share whatever “in-the-moment” content they wanted because it was cool to share your passions.

Then things really took a turn – and for those of us purists, it was for the worst! As social media and celebrities became synonymous with pop culture and mainstream media, everything was photoshop central. Users turned to creating the perfect highlight reel via their feeds to emulate the lives of A-listers and conform to societal norms.

But now, it’s time to get real yet again! Maybe this time, without those awkward peace signs and 2014 Tumblr aesthetics.

The social media landscape has grown exponentially in recent years, especially as a result of the pandemic, where it became the sole place for human connection.

The trend of unfiltered media really created the need for influencers who shared their everyday lives, from happy moments to the struggles of being in the spotlight via short-form videos.

These influencers have captured the attention of Gen-Z who have contributed greatly to this media shift. These consumers have grown up on social media, and this has provided brands and marketers the opportunity to play into their humor and authenticity by making content that may be out of the box or seem unprofessional. However, it’s these trends and small inside jokes that resonate with the majority of users and make this content so powerful.

This content type has since dominated all social media platforms and their algorithms, continuously pushing brands and creators to experiment with everchanging trends and sounds by giving them an avenue to talk to consumers, not at them.

As a result of the growing desire for natural content, a new social media app has stepped onto the scene, and BeReal has taken the world by storm!

So what does this all mean for other long-standing social media platforms trying to keep up?

Nowadays, it is almost impossible to see any one platform having its ‘own’ feature. And BeReal’s strategy of authenticity is no exception! Instagram has come out with Candid Challenges.

TikTok Now, and Snapchat’s dual camera are all examples of exactly what we are talking about. We’ve seen this all before, with Instagram developing Reels and YouTube introducing Shorts.

But, what these platforms are all missing is the consumer’s desire for them to stick to what they’re best at!

Audiences have all grown accustomed to utilizing different apps for different reasons, and the same goes for social media platforms! For example, no one will go to their banking app to find deals on hotels or their weather app to find local traffic updates.

In theory, they COULD be connected if you try hard enough (Ahem: Elon’s Twitter Takeover to create X.com), but why not do one thing really well and be known for it? BeReal’s only function is to capture a dual-camera photo in one specific moment and post it to friends’ feeds. They saw astronomical growth in their user base because they occupy an original space and have yet to try to incorporate anything else.

Instagram recently came under fire for making too many changes to their algorithm, and user feedback created a huge scale back on testing these recommendation features.

We want to hear what you think! Get real with us and DM us to let us know!